Why Socialism Makes the Rich Richer
With the historic passing of Obamacare in the U.S., much hype is being made by it's proponents that it will help fix the widening gap between rich and poor.

Unfortunately, this isn't what will happen. A quick example will show why government taxes, which is what Obamacare really is, make the poor poorer and the rich richer.

Caterpillar has announced they will take a 100 Million dollar hit from the extra taxes due to Obamacare, as will other farm machinery construction firms. This extra cost will be passed on to the consumers, that is, the farmers. So now the farmers are paying more, so their extra costs will be passed on to the people who buy the food, milk, leather and so on. So, essentially, everyone's expenses will go up.

If you have millions and millions of dollars you can cope with the expenses. You can still buy everything you need, and have money left over to invest. Investments that make you more money.

If you don't have lots of money, then these extra costs significantly reduce your ability to invest.

So a big effect of the new taxes is to reduce the pool of people who have spare money to invest. In essence, leading the lower end of the income spectrum even further away from being more than just workers.

With the reduced pool of people with spare money to invest and less money to invest, the average return on investments made will increase. Leaving the rich, who still have the capital to invest, with higher returns for their money.


"There are those who will say 'unless we announce disasters, no one will listen', but I'm not one of them," Sir John told The Independent.
"It's not the sort of thing I would ever say. It's quite the opposite of what I think and it pains me to see this quote being used repeatedly in this way. I would never say we should hype up the risk of climate disasters in order to get noticed," he said.

So when Piers Ackerman documents the many cases where Sir John does announce disasters and scaremonger, it is clear that all Sir John is really saying, is that he would never be so truthful as to admit he announces disasters to scaremonger about global warming.

Nice work Sir John...that's for coming clean and admitting you are a liar. In other news, an evil robot on another planet just imploded in front of William Shatner.
- posted by Alan Grey @ Thursday, February 18, 2010 0 comments

Abbott says women are valuable...feminists up in arms
Opposition leader Tony Abbott is reported in todays news to have said that women  "shouldn't give themselves away lightly".
"Deputy" Prime Minister Julia Gillard of course was upset at the marks, saying that Abbott shouldn't tell women what to do....Julia prefers her women cheap obviously.


In other news, the government has withdrawn it's campaigns to discourage smoking, not wearing seat belts and getting a tan, as they don't want to tell people what to do....


Update: More of the context of Abbott's comments are available in this abc article.
Talking about his daughters he said
"Because in the end these are all very personal things. But if someone asked my advice, I would say, don't do anything that you will live to regret if you can possibly help it, and try to act in ways in which a self-respecting person would act."


Once again, this shows the pathetic dishonesty of Julia Gillard and many commentators.
- posted by Alan Grey @ Wednesday, January 27, 2010 0 comments

Women Demand Equal Jail Time
Following on from France's legislating that females must comprise 40% of the boards of public companies, women's groups are demanding women must also make up at least 40% of the prison population.

Like the boardrooms of France's public companies, prison's only have 10% female representation, and women's groups are demanding gender equity is prison.

"Women will only be equal once this terrible inequity is resolved." one spokeswoman commented.
- posted by Alan Grey @ Friday, January 22, 2010 0 comments

PZ Myers shows why evolution is unfalsifiable
PZ Myers, on the Panda's Thumb, has a great post up which highlights just how plastic the claims of common descent evolution are.

The change has to do with finding evidence of a tetrapod 18 million years further back than currently accepted. The evidence also shows more advanced features than Tiktaalik, which was a fossil that seemed to give great joy to evolutionists like PZ.

The first diagram (which appeared in Nature) is useful. 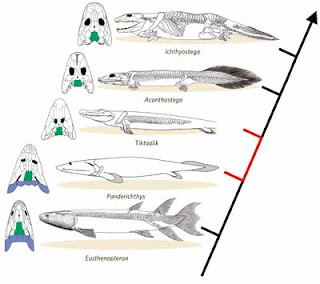 PZ, tells us "Notice what you don't see? They didn't publish this as a direct, linear relationship that could be disrupted by a minor anachronism."


Yep. The diagram cannot be disrupted. No direct relationships are given. We can't actually tell any relationship from the diagram. 'Unexpected' findings will merely cause the modification of relationships, never the questioning that common descent evolution is true.


Notice too, that PZ tries to pass of the new finding as a 'minor anachronism'.


Creation Safaris has a good round up here


It seems other people think it a little more than minor..


The next couple of diagrams neatly show how evolution simply adapts any time an 'unexpected' finding happens... 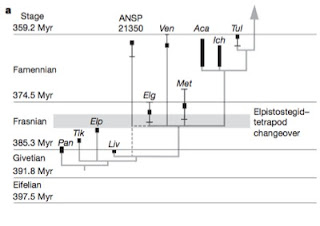 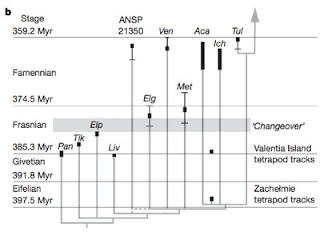 Notice how the diagram is simply extended and modified to adjust to the new findings. ANY new finding can thus be adapted, BECAUSE a direct relationship is never given.


Creating a morphological tree is not evidence for evolution, as a tree can be created for pretty much any dataset.


But don't tell PZ that, because his faith in evolution is blind and un-shakeable.
- posted by Alan Grey @ Monday, January 11, 2010 0 comments

Malcolm wants to try and force all his liberal friends to vote FOR Labors Emissions Trading Scheme (ETS). This is insanely stupid on so many levels.

1) Politically, agreeing with the opposing party gains you no benefit and considering every new survey that comes out shows the population becoming more and more skeptical, there is only political benefit from opposing the scheme, which looks to cost the average Aussie around $1,100 per year at least. It is ironic to find a Liberal supporting an environment scheme even the Greens won't support.

Worse still, he is trying to force a party line vote, which has never been how the Liberal party does things. That is how Labor does things.

Copenhagen will not be swayed by whether Australia has an ETS, so there is no sensible reason to hurry and try and pass the legislation.

2) Economically, there is no benefit to Australia as the ETS as our impact on temperature (even according the to alarmists) that any reduction in our green house gas emissions will be non-existent. Hence ANY cost hurts Australia economically.

Naive, nice sounding programs that actually hurt us all in the long run are Labor's specialty, not the Liberals.

3) Scientifically, the case that man-made global warming is a world ending threat are unravelling. The data has been manipulated and fudged by a bunch of scientists desperate to have their religion change the world. The climate computer models are broken and unreliable.

The recent climategate emails are only the latest in a long line of evidence that this is the case.

4) Morally. Everyone keeps telling us that global warming is a moral issue. And it is. People have died because of this scam already. Supporting the impoverishment of people on uncertain science, and bad economics is morally reprehensible.

I assume Malcolm isn't a moral monster, so the only other reasonable conclusion is that he is a moron, and more than likely a closet Labor party member.
- posted by Alan Grey @ Thursday, November 26, 2009 3 comments

Welcome to your lying Prime Minister
Kevin Rudd is blogging (apparently), and of course, it is about climate change.

Right out of the bat, Krudd lets go the biggest whopper you can image

The latest scientific research on climate change confirms our worst fears. Climate change is happening faster than we previously thought, creating a more serious threat to our economy, our environment and to future generations.

Sorry Kev, but you are lying to the public. Even the global warming alarmists over at Real Climate are saying that temperature is not going to rise till 2020.

How then can you say with a straight face that climate change is happening faster than we previously thought? Oh...that's right, you are a Labor Politician.
- posted by Alan Grey @ Friday, July 17, 2009 0 comments